LIFE of a CATERER

I am so excited to actually be the owner of my own catering business. Being an organizer-type personality, this is the perfect business for me, because if you're not organized, you'd be in trouble! Along with being organized, comes being able to work most efficiently given the time schedule - which usually involves cooking for several different parties at once. The best way, I've found, is researching time-saving techniques to both help keep your costs low and save you time and effort in the kitchen.

Below, are a few prime examples of money and time-saving techniques I was able to utilize last week: 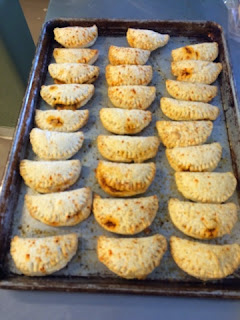 Chilli Empanadas -
This recipe came together in a flash, utilizing Bisquick boxed dough. I am not usually a baker - as I seem to always mess something up: didn't bloom the yeast properly, set the oven temp too high, added too much or not enough flour, etc. But with this recipe, all I had to do was: follow the directions on the box, roll out the dough, cut into rounds, make my own delicious filling, stuff each one, seal with the prongs of a fork and bake. They turned out pretty good-looking and tasted even better!

Next time, I may even see if I can incorporate seasonings or fresh herbs when rolling out the dough. And may roll them a little thinner, for a crispier empanada. These empanadas make a a great 2-3 bite, finger food that can easily be passed at a party. Pair them with an avocado-ranch dipping sauce and you're set!

As mentioned previously, I am not a baker, so when my clients asked for Chocolate Molten Cakes I had two choices: either buy them pre-made (costco had some...) or improvise and save some money.  I am not one to give up on a challenge, especially if I have extra time, so I checked on ol', trusty Pinterest for some cheat ideas...And they came through! 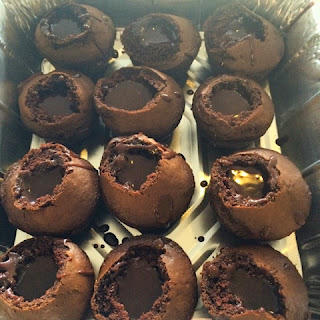 I found an ingenious idea to use plain, boxed Devils Food Cake Mix and make cupcakes. Once the cakes were done and cooled, remove them from the cupcake pan (which Id sprayed with oil instead of using cupcake liners), remove the tops (which had skewed during baking), and dig out the insides with a small melon baller. I then, used bakers semi sweet chocolate and heavy cream to make a simple ganache (melted chocolate and warmed cream); to this, I added a touch of cinnamon and vanilla to make it more personalized. I then added the ganache into the center of each cupcake. and Voilla! Delicious, decadent, EASY Chocolate Molten Cakes! - Heat in oven until warm and serve with vanilla bean ice cream! 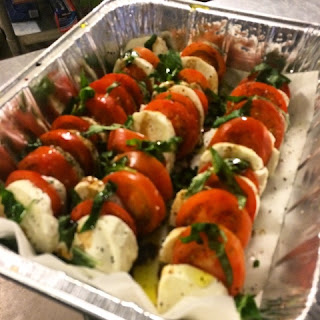 I tried to slice the tomatoes the same thickness as the mozzarella so that it looked more uniform in the final presentation. I then did a chiffonade of the basil and sprinkled it on top. Assembled so that it was alternating tomato, mozzarella, I then sprinkled with the olive oil, vinegar, salt and pepper. Yum! 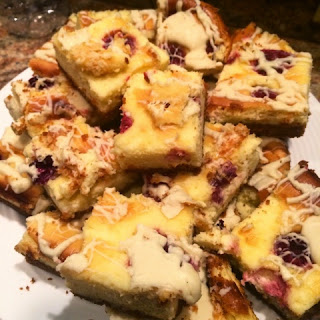 White Chocolate, Raspberry Cheesecake Bars -For these, I actually decided to try my hand at some real baking! I was able to make the cheesecake process a little simpler, by making them into bars in a pan rather than having to use a spring-mold pan and a water bath.  I got a box of Graham cracker crumbs and mixed equal amounts of crumbs to melted butter. Then spread that into the bottom of a baking dish, and pressed with my hands until had formed a crust. This got a sprinkling of salt and brown sugar before being baked until golden. Next, eggs, cream cheese and sugar were mixed together with a dash of vanilla and added to the cooled cookie crumb crust. For a special touch, after adding the cream cheese batter to the pan, I pushed in singular raspberries about an inch apart, right into the batter, before proceeding to bake.
The finished product was covered in a drizzle of white chocolate ganache (melted white chocolate squares with cream), then sliced into squares, and piled onto a plate. Delicious! 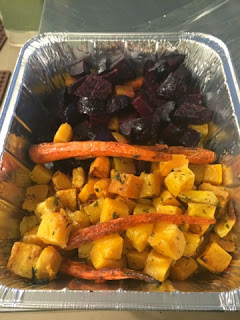 Roasted Root Veggies - w thyme, butternut squash, carrots and beets.  The hardest part about this dish was cleaning, baking and peeling the beets. They are bright purple in color and will easily stain anything they come into contact with. So I had to cook them seperately otherwise all of the veggies would have come out a spooky purple color.

The easiest way I've learned to cook beets is: cut of the tops and bottom stems, place into a large baking pan, fill with water until the beets are completely submerged, cover with foil and place into a preheated 400 degree F oven for about 45mins-1hr. After which, you should be able to peel the beets really easily (after they've cooled, and using gloves so your hands aren't all purple) and be able to slice them into good chunks. I then toss them in olive oil and sprinkle with sea salt and ground black pepper.

For the butternut squash and carrots, I simply peeled the outside of the carrots, and cubed the butternut squash, tossed both with olive oil, sea salt, pepper and fresh thyme. Then, spread them out onto a sheet pan and roasted them (about 20-30 mins) until tender (easily poked with a fork).